This album shows an excerpt of analog live record­ings, which were produced in the last two years at the White Fir Studio on the Swabian Alb, Germany. Have a look at the upco­ming flavor­ed­tune releases on vinyl and you‘ll find
many artists giving their musical state­ment on this strongly limited only-for-promo­tion record.
Have fun!

What is the right place for an analog recording studio in the digital world? A few years passed before we found an answer to this ques­tion, during which produc­tions with a wide range of artists were created. In the summer of 2016 I met the two musi­cians Quinn Sternberg and Josh Roberts. They had come from Bloomington, Indiana, to the Swabian Alb to form a rhythm group for an upco­ming vinyl produc­tion. They stayed with us during this period, using their free time to try out new grooves. I recorded it all and we had great plea­sure hearing the takes later. My first encounter with Jonathan Schmid from Mannheim was at his debut at the Baden-Württemberg Art Foundation in Stuttgart in 2016, and it was obvious to me that he would be awarded a scho­l­ar­ship. That is exactly what happened, and we decided to make a recording with his trio. In the year before, toge­ther with Claudia Rodi and Lothar Landenberger, the idea emerged of making a record with Martin Meixner, the master of the Hammond organ from Ulm. In the following year, he brought Markus Birkle and Tommy Baldu to the White Fir Studio on the Swabian Alb for a fantastic live recording session. At the Jazzherbst in 2014, I was making concert record­ings at the Landestheater Tübingen. Monika Herzig and Peter Kienle, two jazz musi­cians from the Alb who live in the USA, gave a concert toge­ther with the Wüste-Welle Big Band. In the following summer, we started our studio coope­ra­tion, from which the album THE TIME FLIES (featuring Bob Berg and others) emerged. A further produc­tion was recorded with André Nendza in the following year. David Thornton and Oliver Kügel are the two band members of Jonathan Schmid’s trio THE KITCHEN CIRCUS. The three arrived at the Swabian Alb well-rehe­arsed after their Israel tour for a wonderful concert that was the high­light of a multi-day tape recording session. I cannot remember exactly how and where I got to know Tom Wauch. Somehow, I finally found a Fender Rhodes 73 Mark I for the recording studio and of course it needed the right fixes to make it func­tion stably and reli­ably. That’s how I came into contact with Tom; ever since I first heard him play on the instru­ment he had restored, I wanted to make record­ings with him. It would take a few years, but we finally produced THE BLIND TAKES, a first-take recording session that follows the drama­turgy of clas­sical theatre. Tom brought our mean­while mutual friend Michael Classen, who was able to make his Vox AC30, placed in the stone cellar, swing so incredibly that we just couldn’t get enough. A drummer was still missing for the session – I there­fore had the oppor­tu­nity to invite my former band colleague Matthias Wagner. We had not seen each other for fifteen years surely. But he played – at least – as freshly as I remem­bered. Thanks to the ongoing produc­tion ON TENOR, I was able to survey the jazz saxo­pho­nist scene, espe­cially tenor players. Sandi Kuhn, who studied this instru­ment in New York, deli­vered a mature state­ment with an own compo­si­tion. Sebastian Schuster and Christian Huber formed the rhythm group. Christian had parti­ci­pated in several recording sessions in recent years and the slogan “Huber is hot” has spread around fast. You can certainly say the same of the guita­rist Christoph Neuhaus. The place was thus found and the studio was built. It was still a chal­lenge to meet the requi­re­ments of the analog and digital equip­ment. Here I had the support of my long-stan­ding, highly esteemed colleague, Helmut Butz. He helps me with the imple­men­ta­tion of the most varied tech­nical requi­re­ments and always has an open ear for even crazy details. He also puts up a pretty good show as a tape operator. Just like Oliver Matthes, who has been suppor­ting me in his daily studio work for quite some time. It is usually recorded on 1‑inch tape and mastered on ¼‑inch tape. Many thanks also to Daniel Krieger from SST-FFM. He produces the lacquer cut for the records, which are created at Flavoredtune, with great craft­s­manship and is always able to create a very unique feeling. When an album has been produced, it of course still lacks the right pack­a­ging. And here, too, I am glad that I can rely on the mean­while regular colla­bo­ra­tion with Rob Stirner and Florian Dobler. The two are very good at captu­ring and visua­li­zing the musical content of a produc­tion. Last but not least, I would like to thank my dear Claudia Scherzinger, who has accom­pa­nied Label & Studio from the very begin­ning with a great know­ledge of contrac­tual matters. In addi­tion, she never misses a chance to create wonderful dishes for small and large appe­tites at the end of a long studio session. While reading these lines, I notice that I cannot forget to mention Handle With Care from Berlin, and espe­cially Janet Latka there. She always manages to fast track the important last steps and coor­di­nate the work that must still be done. This album shows an excerpt of analog live record­ings, which were produced in the last two years at the White Fir Studio on the Swabian Alb. I hope you enjoy listening, Michael Fetscher 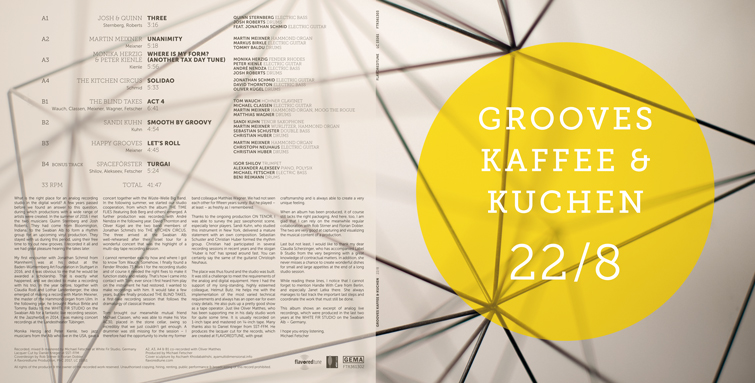